It looks as if you can get round Blogger's "adult warning" perpetual loop by changing the blog's URL from HTTP: to HTTPS:. We'll see. Meanwhile there's my WordPress blog, where I publish my stories, which you can follow even if you do not have a WordPress Account, plus my Twitter and my newTumbl blog
The tiresome thing about this piece of stupidity from Blogger is that LinkWithin, which I use to suggest other posts you might like to visit, doesn't work with HTTPS.

This is a story about the people who live in an Edwardian (or Federation, as it's called in Oz) terrace in Melbourne.  I'll be posting 100-200 words a day.  Bit like a cartoon strip or a soap opera.   Or Tales of the City (Armistead Maupin's wonderful series set in San Francisco).  Tales of my city, Melbourne. 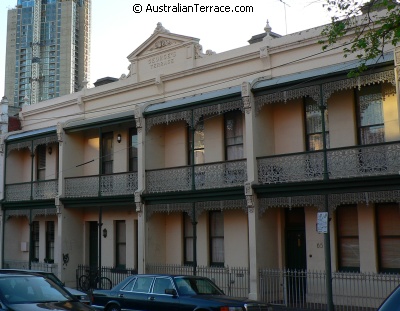 This was an exercise I started to get my writing going again.  I endured some bad stuff in my life, and somehow I found I was unable to write.  I thought to myself that if I could make myself do 100 to 200 words a day, come what may, the creative juices would start flowing again.  The Artist's Way, a book about how to unleash your inner creative genius, strongly recommends that you write three foolscap page in longhand about anything which comes into your head.  By just writing, not letting your inner Critic sabotage your inner Creator, you allow Creation to burgeon.  Majorca Flats would be my equivalent of three pages of scribbles.

So I started writing my hundred-and-fifty words a day.  At first, it was hard to do. I used to do frequent word counts to see if I was anywhere near the limit.   Now I really look forward to it every day.  Now I have to do word counts because each post is too long, I'm enjoying myself so much.  And as always happens, the characters have come alive to me, and have taken control.  Part of my pleasure in writing Majorca Flats -- in fact in any of my fiction -- is that I don't know what's going to happen.  Oh, I have a vague idea.  But it's just a changeable sketch.  All the colouring, all the details are as yet undefined.  When I'm in the grip of the Muse, even I don't know what I'm going to write, how my characters are going to behave.  In an interview here in Melbourne, Armistead Maupin said pretty much the same thing about his own writing.  So I'm on the right track  ....

Almost every day I post a new Majorca Flats episode.  Those in the blog have an attached, more-or-less related image, and each blog post has a link to the next post and the one before.  So if you want pretty pics (some of which, I warn you, are not safe for work) read the story via the blog.  Every ten episodes, I upload the latest chapter to my website.

Blog:
First Majorca Flats post
At the bottom of each MF episode there is a link to the next one.

The latest episode will always be in the most recent one or two posts on the blog.

You can read previous episodes in blocks of 20 here.