It looks as if you can get round Blogger's "adult warning" perpetual loop by changing the blog's URL from HTTP: to HTTPS:. We'll see. Meanwhile there's my WordPress blog, where I publish my stories, which you can follow even if you do not have a WordPress Account, plus my Twitter and my newTumbl blog

A snippet from my new novel, AngelFire.

He looked up into the sky, gray satin prickled with the ice sparkle of countless stars.  One moon, small Razil, was a thin fingernail of silver about the western horizon against the fading translucence of the setting sun, while bigger Razila followed her consort higher in the sky, yellower and rounder, womanly next to Razil's boyish slenderness.  His eyes still on the heavens, he made a wish to the Great Spirit, a wish he knew was unwise.  He wished he could seize Zillan as Razila once seized Razil, and merge their flesh in love and pleasure.  But he knew in his heart that the time was not ready.  Perhaps in a few months, when both moons were full in the eastern sky, warm and loving, he too would take Zillan in his arms.  Angry at his foolish thoughts, he shook his head and his mouth set in a grim line.  His job was to look after Zillan.  His reward?  Perhaps nothing.  Who knew what the Weavers had woven into the Tapestry of Life?  Would his black and silver thread be woven next to Zillan's gold?  He suspected not.


He slept badly that night, dreaming of immense stone halls, filled with a nameless horror, his own path through the vast forest of stone columns which supported a distant roof always just ahead of a pursuit which tramped on his heels.  He woke before dawn, the air cool and renewed, though he was tired and depressed.  He rose abruptly from their bed of leaves and straw.  His lean and lithe panther form was beautiful, had he but known it.  He stretched like a cat, his back arched, his deadly paws extended, and yawned.  For a moment he looked down at the man who was still sleeping deeply, and the love in his heart was strong.  Such a dangerous task!  And so vital!  It might be his last job before the Goddess took him to her bosom in the Havens, but he would do it to the best of his ability, and if he found that Zillan loved him in return, he would take joy from their love while it lasted.  If not – well, loneliness was a familiar companion. 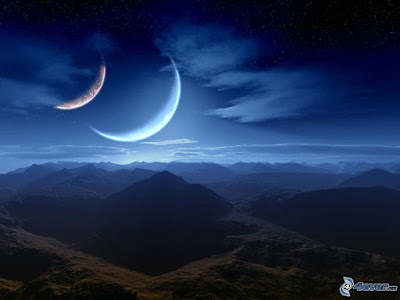 Email ThisBlogThis!Share to TwitterShare to FacebookShare to Pinterest
Labels: AngelFire, my writing